History
Negros Oriental, also called Oriental Negros or Eastern Negros, is a province located in the region of Central Visayas, in the Philippines. It occupies the southeastern half of the large island of Negros, and borders Negros Occidental, which comprises the northwestern half. It also includes Apo Island, a popular dive site for both local and foreign tourists.Negros Oriental faces Cebu to the east across the Tañon Strait and Siquijor to the south-east (which happened to be part of the province before). The primary spoken language is Cebuano and the predominant religious denomination is Roman Catholicism. Dumaguete City is the capital, seat of government and most populous city of the province. With a population of 1,354,995 inhabitants, it is the second most-populous province in Central Visayas after Cebu, the fifth most-populous province in the Visayas and the 19th most-populous province of the Philippines.
Transportation
Negros Oriental has a network of roads, including a national road that spans the circumference of Negros Island. National and provincial roads in the province total more than 900 kilometers, though only about half of these are paved.A large portion of residents do not own private vehicles, and are totally reliant on public transport. The main form of public transport between the cities and municipalities of the province largely consists of privately operated jeepneys that link major towns to rural areas. For short distances within a town, motorized tricycles (locally known as pedicabs) are available.
Weather
Negros Oriental has a tropical climate. Because of the mountain range running from the north to the south, the province has two types of climatic conditions. The eastern part of the province is characterized by unpronounced maximum rainfall with a short dry season lasting from one to three months. The western half of the province is characterized by a distinct wet season and dry season
People & Culture
Each town in Negros Oriental celebrates an annual town fiesta, usually dedicated to a patron saint of a particular town or city. In some of the larger towns, there are particular fiestas for specific neighborhoods or barangays.Additionally, the Buglasan Festival, which was revived in 2001, is celebrated annually in October in the provincial capital of Dumaguete and is hailed as Negros Oriental's "festival of festivals". It is a week-long celebration where you can see unique booths of each town and city in Negros Oriental featuring their native products and tourist attractions. The highlight of the occasion is the float parade and street dancing competition.The province is the home of the last living remnants of the Inata language speakers. The Sebwano language is spoken throughout the province, while the indigenous Minagahat language is spoken in the south.
Food
The best way to immerse oneself in a particular region’s culture is to eat like a local. Its food scene offers a good mix of traditional and modern cuisine, catering to the myriad tourists that flock the city. Being a waterfront settlement, expect seafood to be abundant, readily available and affordable. 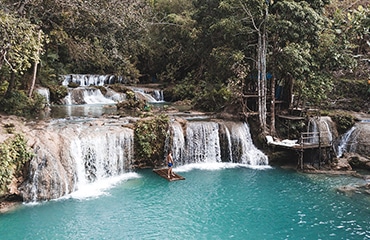