History
Settled by migrants from the Asian mainland back in the mists of prehistory, Japan has seen the rise and fall of emperors, rule by samurai warriors, isolation from the outside world, expansion over most of Asia, defeat, and rebirth. One of the most war-like of nations in the early 20th century, Japan today often serves as a voice of pacifism and restraint on the international stage.
Transportation
Japan has an efficient public transportation network, especially within metropolitan areas and between the large cities. Japanese public transportation is characterized by its punctuality, its superb service, and the large crowds of people using it.
Weather
Japan's weather in Winter, from December to February, is quite dry and sunny along the Pacific coast and the temperatures rarely drop below 0°C. The temperatures drop as you move north, with the Central and Northern regions experiencing snowfall. Southern Japan is relatively temperate and experiences a mild winter. Spring is from March to May. Temperatures are warm but not too hot, plus there isn’t too much rain. The famous cherry blossoms are out during this time and there are plenty of festivals to enjoy. Summer begins in June and the country experiences a three to four-week rainy season during which the farmers plant their rice. It is hot and humid during this time and temperatures are often in the high 30’s. Summer wraps up in August. Autumn is from September to November and is characterised by light breezes and cooler temperatures of around 8-10oC. It’s during autumn that many exhibitions, music concerts and sports tournaments are held in Japan.
People & Culture
Japanese culture was influenced from ancient times to the Middle Ages primarily by multiple Chinese dynasties and to a lesser extent by other Asian countries. For example the Japanese language uses Chinese characters (kanji) for writing, but Japanese has no genetic relationship with Chinese. In the near-contemporary history since the Meiji period Japan was primarily influenced by western countries. Repeated influence, absorption and selection in various ways have added to the development of a distinct and unique culture.
Food
Japanese cuisine encompasses the regional and traditional foods of Japan, which have developed through centuries of political, economic, and social changes. The traditional cuisine of Japan, Washoku (和食), lit. "Japanese cuisine" (or Kappō (割烹), lit. "culinary arts"), is based on rice with miso soup and other dishes; there is an emphasis on seasonal ingredients. Side dishes often consist of fish, pickled vegetables, and vegetables cooked in broth. Seafood is common, often grilled, but also served raw as sashimi or in sushi. Seafood and vegetables are also deep-fried in a light batter, as tempura. Apart from rice, staples include noodles, such as soba and udon. Japan also has many simmered dishes such as fish products in broth called oden, or beef in sukiyaki and nikujaga. 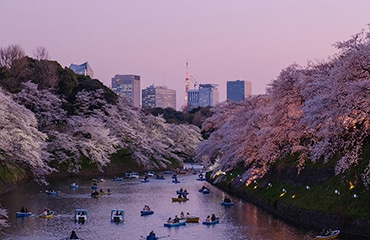