History
On April 7, 1521, Portuguese explorer Ferdinand Magellan landed in Cebu. He was welcomed by Rajah Humabon, the king of Cebu, together with his wife and about 700 native islanders. Magellan, however, was killed in the Battle of Mactan, and the remaining members of his expedition left Cebu soon after several of them were poisoned by Humabon due to threats of foreign occupation. The signing of the Treaty of Paris at the end of the Spanish-American War provided for the cession of Cebu along with the rest of the Philippine islands to the United States until the formation of the Commonwealth Era (1935-1946). Cebu only became a chartered city in February 24, 1937. Many Philippine cities such as Dansalan (now Marawi), Iloilo City, and Bacolod City were only incorporated as such at that time (see Cities of the Philippines). Until then, Cebu City had never been more than a town since its original founding in 1565.
Transportation
You can go around by bus/coach (Ceres - yellow coaches or GT Express - people carriers) by jeepney (small, kitsch open buses), by tricycle (motorbikes with sidecars found in rural areas), by pump boat (wooden canoe powered by a small engine), and by taxi (Uber or local)
Weather
On an average the lowest temperature sticks to 22 degrees Celsius (71° Fahrenheit) while the average high temperature stays at 32° C (89° Fahrenheit). The hottest month in Cebu is May.The city of Cebu is known to remain wet and humid throughout the year due to the rainfalls and the humidity at almost 80% all year.

Here are some average weather facts we collected from our historical climate data:On average, the temperatures are always high. The months January, May, June, July, August, September, October, November and December have a high chance of precipitation. On average, the warmest month is May. On average, the coolest month is January. October is the wettest month. This month should be avoided if you are not a big fan of rain. April is the driest month.
People & Culture
Cebuano, also called Cebuan or Sugbuhanon, the second largest ethnolinguistic group (after Tagalog) in the Philippines, numbering roughly 16.5 million in the second decade of the 21st century and speak Visayan languages with other nearby islands. The Cebuano inhabit the islands of Cebu, Siquijor, and Bohol, as well as eastern Negros, western Leyte, southern Masbate, and northern Mindanao. Most Cebuano subsist through farming or fishing. Art forms are diverse among Cebuanos. Before the coming of the conquestadores, Cebuanos used to paint themselves employing the nowadays popular tattoo art forms. Although this form of art somehow vanished on the island, painting and other art forms is flourishing in myriads of medium. Many famous Cebuanos became clothing designers, furniture design artists, painters, sculpture, among others. Another form of art common in Cebu is dancing. Dances could be interpretations of deity worship, religious devotion (as in Sinulog), or just ordinary dances done during various festivities in Cebu island.
Food
Cebu has its distinct cuisine, which is defined by Wikipedia as an "aggregate of various ways of cooking and dish preparations distinct to the Cebuano people of the Visayas, Central Philippines." According to the chronicles of Antonio Pigafetta, rice was the main staple and the natives Cebuanos drank wine called 'tuba nio nipa'. "They ate macan, also rice cakes (tinapai) and domesticated pigs (babui) and chicken or eggs (silog)." In 1924, Maria Fadullon Rallos wrote a Cebuano cookbook, "Lagda sa Pagpanluto," which documented the recipes of Cebuano, Spanish and Chinese food in the city during that era. And indeed it was a 'fiesta' of popular Cebuano dishes. Appetizers and Salad served during the dinner were Ginabot (Pork Intestine Cracker with Sour Dipping), Kwik-Kwik, Salted Bean Tofu Baboy Kilawen, Peppered Crusted Tuna Guisan, Tangigue Kinilaw with Gata, Salad Bar with Condiments and Dressings, Eggplant Salad and Chicken BBQ Fiesta Potato Salad. That was quite a load of dishes, considering it was just the opening fare. 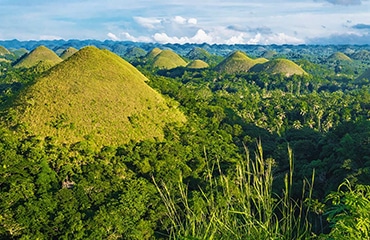